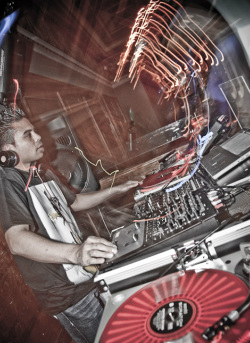 Northern California's own DJ Radio Raheem has ventured over thousands of venues throughout California in his extensive music career. Performing for all ages and playing almost every genre. His versatility gave him recognition from premier nightclubs to the wealthiest towns as their own personal DJ.

In 1995 he started a radio show on 92.3 fm broadcasting from San Jose. DJ Radio Raheem established his first residence at the age of 17 in 1996 at the south bays only twenty-one and under club. At 19 he became a resident at Ibiza and the world famous Sound Factory in San Francisco. As an employee of Mirror Corporation he accepted the offer to perform at the grand opening of Club NV, today it is known as Club 525. He then became resident in both nightclubs in all, Main, VIP, and Conga Rooms.

DJ Radio Raheem began his tour in 2003 at about every club, bar, and hotel in the Bay Area. He held numerous residencies and has had repeated guest spots. He is also known for his work at Wicked Mix. Producing remixes and distributing vinyl records for DJ's throughout the world for radio broadcast and club use.

Today success in the entertainment industry is difficult to achieve, but DJ Radio Raheem has overcome the obstacle. With high performance computers and today's leading softwares, he is one of the few to DJ with music videos.  He is the leading and most inspiring in the industry. With audio and video, DJ Radio Raheem has brought nightclub entertainment to the next level.